Modman is a command line interfacing tool which hashis own command with which you can link any 3rd party extension in your magento project. It uses a symbolic link concept which have the ability to remove the links at any time. Other features of this tool like listing all installed extension, using version control to download and link the most up to date versions in your Magento Project.

As I told earlier, modman uses Symbolic links to deploy modules into Magento, you have to first Enable symlink in your Magento configuration. By default the support for symlinks is disbaled in Magento because this feature has an performance impact and is a potential security risk. Which is not wanted on production systems. But for development this is not a problem.

If you using Windows systen then some commands will not work as its working fine in Linux. So, you need any powerful PHP editor which allow to use terminal inside it where you can run linux command. Here I will explain you installing Modman in Windows system using a Aptana PHP Editor.

1.    Log in to your server and reach to your magento installed directory path.
2.    Paste below command in terminal:

if its not work then use below command:

After successfully installation, you will get below message. 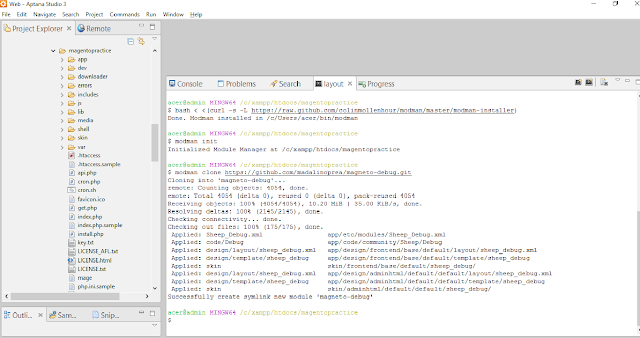 In order to use modman in your Magento installation you need to initialize the modman deployment root.

Now, in your editor after reaching your magento root directory use below command:

This will create a “.modman” folder which will be the place where all modules are “cloned” into.

Once you have initialized your modman “deploy root” you can start installing modules with modman.

and flush your cache.
You will find magento debug extension folders in your modman folder.

So, that’s it, hope this is useful introduction to modman and why you should start using it. So, download modman in your magento project and start using it.
Tag : Magento

Wow! that's amazing. Thank you for the great tips. It's so nice of you to share with us.

Thank you so much for reading my blog...

Thanks vinay...for reading my blog...

The information which you have provided is really nice and awesome. magento development company uk Provides some very useful insights of how things actually work. I want to share something more about this as well.

I enjoyed reading your article. Please make more interesting topics like this on.
I'll come back for more :)

From Japs a researcher from AOC, a company whois into ecommerce website design Sydney